I was pacing a local book fair brimming with authors where my eyes kept drifting to a book below the nameplate of Bob Cowser, Jr. The brief summary on the cover sealed my purchase because I'm a bit of a true crime junkie. There's an element of intrigue with getting a "behind the scenes" view of an event that seems too unbelievable to have occurred in the first place. 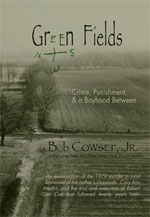 Green Fields dissects the murder of an 11-year-old girl named Cary Ann Medlin. If her part of the story isn't disturbing enough, the back story of the man accused was worthy of spewing bile. Though I believe that's what ultimately draws people to books like this. A need to reassure themselves that murderers don't randomly lurk around every corner. That they don't evolve by chance but are instead created from a childhood of nightmarish circumstances. This is an important security because it gives us hope that there are standard warning signs of a killer in the making. If we can understand what leads a person to murder then we can better protect the welfare of ourselves and those we love.

I found it difficult to review a book like this. It's a catalog of facts about someone who lost their life. There is no like or dislike in that. It's a double edged sword for the families involved and I finished the book feeling an equal sadness for both sides. The irregularities of evidence and his insistence of innocence to the end will continue to make me question if justice sank or swam in this situation.