James and the Giant Peach by Roald Dahl

A grasshopper, spider and worms, oh my! A centipede, ladybug and child, but why? 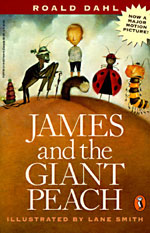 This fantastically peculiar group of friends survive an epic journey aboard an airborne peach while encountering many obstacles along the way. Over the countless years since I last read this book, I'd forgotten much of the story. Reading it this past week felt like the first time, all over again.

I found a favorite character in the Centipede. Despite his harsh nature throughout the book, he ultimately won me over with his witty and funny outbursts into song. Oddly, the character I had the least attachment to was James. I sympathized with the loss of his parents and the cruelty of his Aunt Sponge and Aunt Spiker, but his appeal seemed to waiver when presented aside the array of lovable bugs. The insects were well written and they easily overshadowed the other characters by their presence.

The "where are they now" ending of the book brought the story full circle. A fitting end to such an elaborate escapade spanning one continent to another.