I battled myself for months on whether or not to buy this book. I was never fully convinced that I'd find it appealing. I did finally buy it, but only because it was on sale and I paid with a gift card I got for Christmas. That way, if it was boring, I wouldn't be out any money. 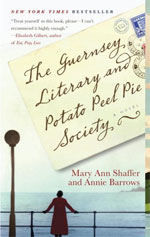 Turns out I was a complete idiot for not buying it sooner. A book written entirely as corresponding letters between friends was an exciting concept for me. The story had a lot of charm. It offered up many different elements.

In addition to this being a memorable story, I also learned two interesting things. I have now heard the term "Jerry-bag" and I now know that Oscar Wilde's full name is Oscar Fingal O'Flahertie Wills Wilde.

I had a lot of fun reading this book. It was full of surprises that made me laugh and it gave me a much needed vacation upon the resilient and delightful shores of Guernsey.