The Poisonwood Bible by Barbara Kingsolver

To live is to be marked. 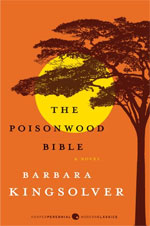 As a five hundred page read during the Thanksgiving holiday, this book was quite the investment. The story of an American missionary family living in an African village wasn't the foundation for an action packed novel but it held its own despite the slow speed.

I sensed the story was written at this snail's pace as a representation of the long and mostly uneventful lives of the characters. It gave me a fly on the wall look at how daily life would drag by without television, telephone and transportation.

The eccentric antics of the overbearingly religious father made him an outcast who was feared and disliked. His practice of forced baptisms and accusatory sermons puts him in the league of so called religious leaders who end up turning more people away from religion than they draw in. My disdain for that behavior made it difficult to read the book without anger.

Having the chapters randomly told from the perspective of each female proved vital to the story's flow and success. The women have vastly different personalities. I became most attached to Ruth May and Adah. Their individual stories tugged at my emotions.

The book's end didn't play out the way I had hoped but I appreciated the unpredictability. My heart is always rooting for a happily ever after but my mind wants the element of surprise. This ending packed a sting then gave me just enough to be content with how the characters turned out. It was a story of circumstantially ever after.